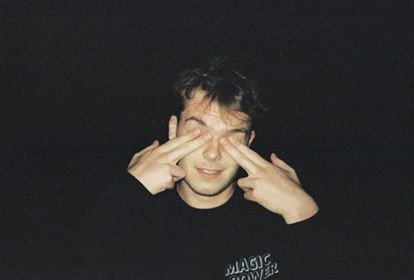 Even though Victor missed out on the formative years of electronic music, it didn’t stop him from discovering the depths of older dance music, which has become one of his calling cards.
It’s not just the classics Victor relies on though. Drawing influences both from early Chicago/Detroit House & Techno and the UK Hardcore continuum alike, Victor is not a DJ to shy away from any genre borders. Comfortable at just about any tempo, he’s likely to mix old school UK-Hardcore/Jungle with high-bpm electro or even footwork & juke in the same set he started off with a Chain Reaction dub techno medley. Listen to his radio show on Munich’s Radio80000 where he frequently invites his pals and you will get an idea of just how diverse his DJing is.
It’s not just old music he’s after though: Having started his own imprint Magic Power to showcase Berlin’s young, up & coming producers that are doing something different to the current status quo of dull and industrial Techno, he also has access to a large pool of unreleased music.
In 2017, at the age of 21, he racked up gigs at Berghain/Panorama Bar, Concrete Paris, Institut Für Zukunft in Leipzig and a main stage performance at Berlin’s Krake Festival for „challenging electronic music“ amongst others.
His first compilation is currently in the works: a joint 2×12“ release with the Lackrec crew which is bringing together the talents of both Label’s artist rosters.